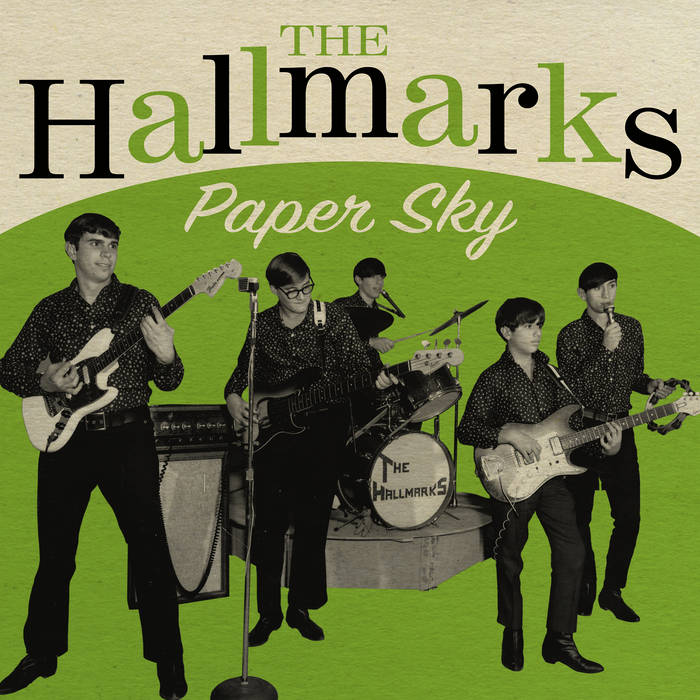 When the Hallmarks auditioned, Tommy Falcone turned his back. Twenty bands arranged around the perimeter of the warehouse in Keansburg, New Jersey, in 1966, with Falcone seated in the center, pointing to each one in turn. The Hallmarks were easily the most ragtag gang in the room—with a microphone taped to a birdcage stand, a low end provided by a guitar strung with bass strings, and a mismatched collection of borrowed drum hardware—but Falcone couldn’t see it with his back turned, which was the point. When he finally turned around, Falcone signed them on the spot.

The Hallmarks had only been a band for a year at that point, forming around songwriter, guitarist, and singer Russ Scalzo, his brother Joe Scalzo on drums, cousin Tony Scalzo on rhythm guitar, neighbor Jim Bova on bass, and friend Rick Gager on lead guitar. “I wasn’t good enough to figure out anybody else’s songs so I’m gonna make my own,” said Russ.

Falcone knew the times were changing, clothes more colorful, even music stores switched from brass to mostly guitars and amps. Beatle bowl cuts and matching outfits gave way to long hair, mustaches, and bell bottoms, which was a problem for the Scalzos at Shore Regional High School.

Harassment from the school authorities over the Hallmarks’ hair got bad enough that Falcone drafted a flattering letter to the principal on official Cleopatra letterhead: “We have just put under contract the group known as the Hallmarks. I understand four of the five members attend your school, and would again like to ask your permission to allow these members to keep their hair as they presently do, for professional reasons. It seems that Shore Regional H.S. has a lot of talent to offer.”

But the hair helped when he met his future wife, the daughter of a telephone company party planner who booked the band on February 10, 1967, for a corporate gig. Russ and Gail had a rare connection, lovestruck in both an instant and five decades later. She wanted him in her life, he wanted her in his band.

Russ wanted to do for her what Falcone had done for him, working with his new girlfriend to build up her technique and her confidence, giving her the training to unlock her natural talents. Soon Gail was delivering a powerful vocal performance—the band’s showstopper. “We were doing a frat party one night at Monmouth College,” Tony recalled, “and those frat boys were down on their knees in front of her.”

Losses mounted. Tony Scalzo was drafted in 1967 right out of high school, shipping out to California to join the Navy Reserve. Losing Falcone hit the band even harder—but he’d taught Russ Scalzo well. Scalzo continued to record and tried to sell a single himself to Columbia, “Cellar Walls” b/w “Just Me and the Blue Jay,” but the labels passed and he grew increasingly frustrated.

A particularly bad drug trip—involving satanic chanting and a levitating woman—sent Bova to the brink of suicide, ready to throw himself off a bridge, and then brought him to Christ. In the 1970s, the Hallmarks changed their name first to Friends and then released three albums as Saved by Grace, transformed by Bova's salvation and sobriety into one of the earliest Christian rock groups in America.

From a basement in New Jersey, Tommy Falcone remade himself into a DIY Phil Spector. From 1962 to 1970, he founded and ran Cleopatra Records. With a whirlwind imagination and an omnivorous approach to genre, Falcone discovered and mentored young Garden State talent, wrote songs and produced wild studio effects, and quit his day job to promote it all himself. ... more

Bandcamp Daily  your guide to the world of Bandcamp

cktrl talks about heartbreak and his new record 'Robyn'